Publication and Innovation of the Year Award

Publication and Innovation of the Year Award

At the Opening Ceremony of the Second Congress, the award “Publication and Innovation of the Year” was given to Ass. Prof. Dr. Salih Sh. Krasniqi, Dr. Sc.

The award is dedicated to his book “War crimes against patients and medical staff, committed by the Serbian police and military forces in QKUK during the period 1998-1999”. This is the first fact-finding book, which testifies to the barbaric acts of genocide of the Serbian government against patients and health personnel of UCCK during the last war for the freedom of Kosova. So, it is a factual book, through which the author wants to reflect on the extent of all forms of violence and pressure exerted by the Serbian government on patients and health personnel in one of the most important health institutions in Kosova during the war from May 1, 1998, to June 20, 1999.

In this book, within the main topic, are presented the names of patients admitted to the hospital, their diagnoses, and the vicissitudes caused to them by the Serbian police located within the UCCK. Among the patients admitted to the hospital, there were many injured, abused, beaten, tied to the bed or radiator that had cigarettes extinguished in their hands and body, killed, missing, etc. Also, in the reflected evidence, there are many patients for whom there is no complete data.

Furthermore, this book by Dr. Salih Krasniqit has also been announced as the “Best Book” in the Bulletin of the Kosova College of Surgeons (Volume 1, No.1).

The award and the work and career of Dr. Salih Krasniqi was presented by Dr. Ramiz Tafilaj. 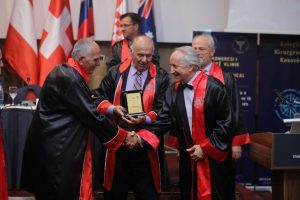